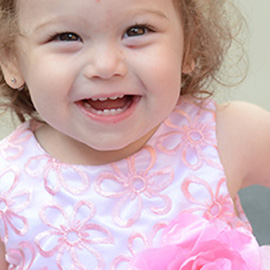 In July of 2012 I found out I was pregnant, I couldn’t have been more excited.  I was considered high risk due to a prior miscarriage.  Everything was going great and when I went in for my routine ultrasound, we found out that we were having a baby girl. 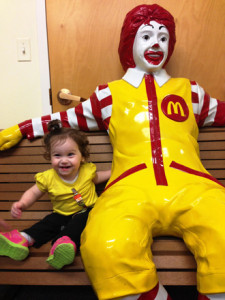 But then my world got turned upside down.  The tech told me to give her a minute she wanted to get someone else to take a look.  They were scanning over my belly and started to whisper.  I asked what was going on and they told me they were having a hard time finding her bladder.  The next thing I knew there was a third person in the room.  They said don’t worry it could just not be in the correct place or it could be small.  My pregnancy was going well she was moving and growing, and making me sick 24 hours a day seven days a week.  So I went back for another ultrasound and they still couldn’t find her bladder.  They gave me a ton of fluids and again started looking for her bladder.  Still nothing, so I went home worried to death, because they wanted me to come back in later that afternoon to do the ultrasound again. Still nothing.  At that point, the Dr. wanted me to go see a specialist in Annapolis. I went in for another ultrasound, the specialist found a “shadow” of what he thought was her bladder.  He wanted me to come back in a week to repeat the scan.

By now I’m worried but on a happy note we picked out a name Giovanna Marie (Gigi).  Gigi’s name means God is gracious.  When we went back the specialist he didn’t find anything this time, so he wrote me a referral to go to Children’s hospital in Washington DC for a fetal MRI and another ultrasound.

I could hear people talking outside about my MRI and then a nurse said they finally found her bladder.  Finally I could get some answers. We meet with the pediatric urologist later that day.  He told me that Gigi had a rare medical condition known as Bladder Exstrophy (or BE).  Bladder exstrophy happens between 6-8 weeks in utero, the abdomen doesn’t fully close and the result is that your bladder is on the outside, and also you have a gap in your hips.  It’s more common in boys then in girls.  I had so many questions.  I was referred to Dr. John Gearhart, a specialist at Johns Hopkins that knew all about BE.  A few days later we went up to meet with Dr. Gearhart.  His office staff was so friendly and so was he. I felt so comfortable and confident in “our angel on earth” (that’s how Gigi and I refer to Dr. Gearhart).  He answered all of my questions and told us what to expect when Gigi was born.

Dr. Gearhart talked with us for over two hours and also set up a meeting with other BE families.  He gave me his email address, office number and also his home and cell numbers.  I knew that we found our man.  Just a couple months later I went to Hopkins again to give birth to my pride and joy, my miracle.  Along with all the staff in my room (my doctors and nurses, the NICU team and extra nurses and doctors for Gigi), was my mom, Gigi’s dad (Jacob), and Jacob’s mom.

On April 4, 2013 at 5:35AM weighing in at 7 pounds 5 ounces and 19 inches long, Gigi entered the world.  In all of my ultrasounds we finally saw why they were having such a hard time finding her bladder.  Gigi was in a sterile bag from her armpits down and then she was handed to me and it was love at first sight.  I only held her for a few minutes because she had to be taken to the NICU for more tests.  Just 24 hours old and I’m signing consent forms for anesthesia and a minor procedure in the OR to see really how big Gigi’s bladder was.

Dr. Gearhart came out and said unfortunately her bladder was too small at this time to close.  Gigi’s bladder was 2 cm by 2 cm.  It had to be 4 cm by 4 cm in order to close.  So two days later we went home. At first things weren’t easy.  We went through diapers like crazy and outfits to because Gigi urinated out of her bladder instead of down below, so diapers had to be on just right.  We were always in the pediatrician’s office due to severe diaper rashes from being constantly wet.

At 4 months old Gigi again went into the OR to see if her bladder had grown, it did but not enough it was only a half cm bigger then when she was born.  Gigi did this procedure again at 8 months old and still no luck, no bigger.  Dr. Gearhart said “unfortunately she has a crappy bladder” and he wanted to remove it.  So on Gigi’s first birthday, she had a ten hour surgery to remove her bladder and reconstruct her hips and vagina.  Gigi’s surgery went great and we could finally go back and see her in the PICU.  Gigi has a stoma since she doesn’t have a bladder. Gigi also had hip surgery because BE kids hips are not closed like ours.  She had six pins (three in each hip) so that they could hold her hips together.   We were in the PICU for a week and in the hospital for a total of 8 weeks.  They had her on heavy drugs to keep her as still as possible.  Gigi got out of traction on May 15th, which was the best day of my life because I got to hold my angel again.

We went back to RMH of Baltimore while we weaned Gigi off of her meds and waited for doctors’ appointments.  We made so many good friends at RMH that we will never forget.  The staff was amazing and made us feel like a part of the family.  The countless volunteers were also amazing as well as providing us with wonderful hot meals and things for the kids to do.

RMH will always be held close to our hearts and we will be forever grateful for what they have done for our family.  If it wasn’t for RMH then we would not have been able to stay in Baltimore with Gigi.  Gigi will have at least two more surgeries and are hoping to stay at RMH again.  Gigi is now 18 months old and her prognosis looks wonderful.  We couldn’t have made it without all of our family, the wonderful doctors and nurses, the wonderful families we met at RMH and without all the love and support of the RMH Staff and Volunteers.