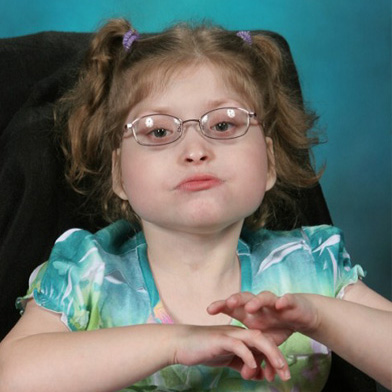 When Calvin and Michele Brewster had their third child, Karson, they had no idea how much their lives would change. They had seen their son Cody take his first steps and their daughter Kaitlyn say her first words; but when Karson was born, the Brewster family’s worlds were turned upside down. She was born with a cleft palette and other physical abnormalities. Doctors thought she had Down’s syndrome, but at just over a week old, she was diagnosed with 18q minus syndrome—a rare genetic disorder. They were told that Karson might not ever walk or talk; she might not ever say the words “I love you” or play on a playground. But for the Brewster’s, the worst news came when they were told that the syndrome affects everyone differently, so Calvin and Michele would just have to “wait and see” how the disorder would affect their baby girl.

One effect of 18q minus syndrome on Karson’s body is immune deficiency, which often leads to infections and severe illnesses that most children’s bodies would fight off naturally. And when Karson gets sick, she can’t just go to the doctor; she has to travel nearly seventy miles to Johns Hopkins for long-term treatment. The first time Karson was admitted into Johns Hopkins, Calvin and Michele stayed in a hotel because they had nowhere else to go where they could be near their daughter. Even with the hospital discount, they couldn’t afford to stay for more than a few nights. After about ten days of staying in a hotel and in the hospital, a social worker told them about the Ronald McDonald House. Calvin called right away, and was ecstatic to find out there would be a room available that night. “It was a big relief, like the world had just lifted off our shoulders, because we had somewhere to go so close to Karson,” says Michele. It only took a few minutes for them to see that they had a new home-away-from-home, where they could be near Karson, where Kaitlyn could play, where Cody could visit his sister, and where they could all be together and all be comfortable.

Since 2008, the Brewster family has come to Baltimore once a year, so Karson could be treated at Johns Hopkins. She has suffered from infections and viruses, but she always pulled through with a smile on her face. “I don’t even know how to express how much joy she is. She lights up a room,” says Michele. It’s that smile and the support of the Ronald McDonald House that help Michele and Calvin stay positive through everything. They’ve had to watch their daughter get extremely sick at least once a year; they’ve seen her put on a respirator and an oscillator; they’ve watched her go through surgery to fix her cleft palette and seen her get sixteen teeth pulled at one time. They have had to watch their youngest daughter suffer over and over again, but they never lose hope.

Through everything, the Ronald McDonald House offers the Brewster’s much-needed support. “Even though your child’s in the hospital, you can take a break, regroup, then you can go back in stronger,” says Michele. “You feel secure when you’re here,” says Calvin. The House allows them to stay together and keep working to support their family. Calvin is a truck driver, and Michele takes care of the kids in addition to working towards her nursing degree. They work hard every day to give their children the lives they deserve, and the Ronald McDonald House is always there for them. For that, the Brewster’s are eternally grateful—so much so, that they organize a fundraiser to support the House every year.

Because of everything they’ve gone through, the Brewster’s have learned to appreciate the little things, like seeing Karson, now five years old, roll over for the first time at age three, or seeing her sit up on her own for a full thirty seconds when she was four. She has even learned to stand with just a little bit of support and now goes to school when she’s not in Baltimore. “We take it day by day because we never know what is going to happen. When she makes a milestone in her own time, we just cheer,” says Michele. The Brewster’s have overcome so much, but they know their lives will never be easy. This is a lifelong journey for Karson. Calvin and Michele still don’t know whether she will ever walk or talk, but they will be by her side every step of the way.  And they know that the Ronald McDonald House will always be there to offer them a place to rest, so they can help Karson get stronger every day.