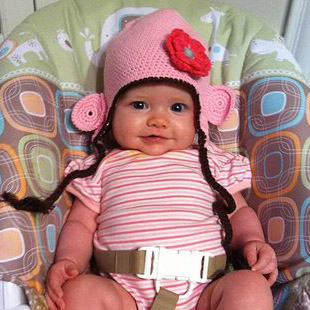 “We left the Ronald McDonald House in Baltimore in July of 2012 after living there for almost 5 months. Today I received the most beautiful card from them along with a very sweet necklace. I cannot say enough wonderful things about the organization – they took us in and made us feel at home when we were 2,000 miles away from our own home. If you ever have a chance please donate or volunteer. It is truly a wonderful place!”

London Giardino was a happy, thriving, 8-month old until she began throwing up in March 2012. Her parents thought she was just battling a virus until she suddenly became unresponsive, and on March 28, 2012 they rushed her to the ER. That day a CT scan was performed, which showed that London had severe hydrocephalus and a mass in her brain. She was rushed into surgery to place an EVD, and the doctors requested to do an open biopsy and leave a piece of her skull off. Her parents said no and she was transferred 5 days later to John Hopkins. While at the new hospital, London was in the PICU and she came down with a major staph infection, which delayed her doctor from being able to operate. Once she healed she had a biopsy and some more EVD changes.

In May 2012 London was transferred to Children’s National in D.C. where she had a 10-hour brain surgery to try and remove the tumor. She almost died on the table and had a stroke during the surgery. She also had a shunt placed to help relieve pressure, 3 shunt revisions, and 3 rounds of chemo. By now, she was paralyzed on her right side. After a disagreement with their surgeon about placing an ETV due to shunt malfunctions, they transferred London again to New York where a doctor was able to perform an ETV surgery, which was successful, and London was finally free of pressure in her brain.

In July 2012, her parents took London back to Texas to be reunited with her twin sister and older sister. She seemed happy and healthy, but just two weeks later she wouldn’t open her mouth and became unresponsive again. Her parents drove her nonstop back to New York, but in Pennsylvania, just 45 minutes away, London stopped breathing and she was taken by life flight the rest of the way. They found out that day that her tumor had tripled in size in just a few short weeks and were told surgery was no longer an option, and that they should give up and take her home. They tried a few more rounds of chemo, but she couldn’t breathe and was put on a ventilator. The chemo also caused her tumor to spread down her spine. In October 2012, her parents found a new doctor in New Jersey who agreed to do a laser ablation surgery. The surgery was successful and got rid of most of the tumor, but she was too weak and her body gave out. London died in her mother’s arms in the PICU on October 23, 2012 at just 15 months old.