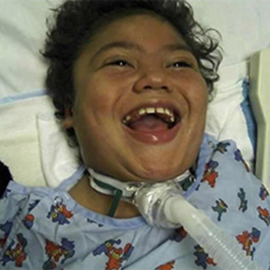 This story was originally published in the 2012-2013 Annual Newsletter.

Every day we meet the most amazing parents. Even in our landscape of loving and dedicated mothers, Melissa Toledo stands out as a true Mama Bear, a warrior in high heels, an advocate and champion of the little guy, her little guy. Melissa is mom to 8 year old Malachi. Malachi has been in and out of the Johns Hopkins PICU since he was an infant. He has never stayed at the House because he is always inpatient but Melissa has been here so much that she is part of our family. Just as we were going to print with this annual newsletter, I received a text from Melissa saying that the doctors had told her that her son Malachi was not going to make it through the day. Malachi Jordan Singleton, 8 years on earth, passed away on October 11, 2012. While his lifelong series of illnesses prevented him from speaking, his bravery through it all spoke volumes about the power of courage and resilience and most of all, a mother’s love. Here is Malachi’s story, written by his mother only days before he passed away: I had a normal pregnancy with no idea Malachi had any issues with his health until one day my doctor ordered a sonogram because the baby was already 6 pounds at 34 weeks. When I had the sonogram, I knew something had to be wrong because they kept calling different doctors in to look at him. I was then sent to a local high risk pregnancy doctor who told me there was something wrong with Malachi’s heart. On April 8, 2004 my world was shook when I had my first appointment at Johns Hopkins Cardiology. They sat me down and told me that my baby has something called tricuspid atresia with a ventricular septal defect and pulmonary stenosis. My heart sunk. I had no idea how my baby could have this. The doctor told me Malachi’s congenital heart defect happens 1 in every twenty thousand births and there is no known cause why this happens. And with the biggest friendliest smile they told me “We can repair this.” On May 15, 2004, I went into labor after being induced. I had 14 people attending the birth of Malachi. They handed him off to one set of doctors, and then handed him off to another set about 10 minutes later. I got to hold Malachi for 3 minutes before they had to take him off to the NICU. Malachi did well and I got to take him home to Pocomoke City 3 days later. Two weeks later he had to be airlifted to Johns Hopkins because he turned grey. I was told he has acid reflux and spent 2 weeks in the hospital before going home again. Days later, on June 18th, Malachi again had to be flown to Hopkins. The transport doctor said there is a machine called ECMO that could potentially save his life. I said do what you have to do to save my son’s life. When I walked into the PICU, nothing could have prepared me to see what I was about to see. My 8lb baby boy hooked up to this ginormous heart and lung machine that was beating for his heart and breathing for him, and circulating his blood in and out of his body.

That started Malachi’s year long stay at Johns Hopkins Children Center. During that year he had 3 rounds of ECMO. The doctors said that he was the only child in Hopkins History to survive ECMO three times. He was also diagnosed with a rare blood disorder. I was told at the time Malachi was the only child in the world to have this and he is in a medical journal because of it. Since that first year, he has had 4 heart surgeries, 3 cardiac arrests, a stroke, 2 tracheostomy surgeries, and a G-Tube Nissan Surgery. Due to his multiple cardiac arrests and stroke, Malachi has brain damage. Malachi has endured so much in his 8 years on this earth. I believe everyone has a purpose and I strongly believe Malachi’s purpose on earth is to show the world the power of prayer is the most powerful action ever and that GOD still performs miracles everyday.

Malachi is just like any other 8 year old. When he is home, he loves going to school at Cedar Chapel Special School in Snow Hill, Maryland. He loves riding on the school bus in his wheel chair. He loves spending time with his brothers and sisters and they are always making him laugh. Malachi loves watching SpongeBob, Mickey Mouse Clubhouse, and he loves going shopping with me because he gets to hold the little basket. Malachi loves DISNEY WORLD in Florida. We went there through the Make a Wish Foundation and had a ball. Malachi absolutely loves Mickey Mouse and one day I hope to take him back there.

Malachi’s illness has had a big impact on our family. It has made my other children more sensitive and more compassionate to special needs children. If they see a special needs child being picked on, they jump to their defense. I have had to spend countless holidays, birthdays, school events, football games and graduations away from home. But my other children are very understanding. They say “Mommy, it’s ok, you need to be with our brother because he is so sick.” Malachi’s illness has inspired my oldest daughter Johnniece to want to be a doctor so she help others like Malachi. She got to meet her idol Ben Carson this summer. He shook her hand and told her he knows she will do great things and Johns Hopkins will be lucky to have her as a doctor one day.

The Ronald McDonald House Baltimore has been more than a place to lay my head for 8 years. It has been my “home-away-from-home”. My safe haven in a storm. It has been a place where I have made lifelong friendships with people from all over the world. RMH has been a place where my children can just be children without looks or people pointing at them saying that’s the brother or sister of the little boy with the heart defect. At the RMH, they are just any other kid. It’s nice to come in at night and not worry about what you are going to cook for dinner because one of the countless volunteer groups has already cooked it and are serving it to you. I have spent many Christmases at the RMH. It is so heartwarming – all the gifts and the love from the community. One of my fondest memories was the first Christmas we spent at the House. All the police officers marched down West Lexington street with all these presents for the families at the house and sang We Wish You a Merry Christmas. I also love it when Ronald McDonald himself does his magic tricks at the holiday parties.

The world can learn alot from the Ronald McDonald House because no matter where you are from or what religion you are, at the RMH we get along and love and support each other like one big happy global family. The Ronald McDonald house has allowed me to be at my Malachi’s bed side every step of the way. I am so grateful for the staff and all of the volunteers who make the RMH. To know that a total stranger cares about me and my children is so heartwarming. When I spoke at a golfing event for the RMH, I got choked up because it was overwhelming to see all the people there giving from their hearts and not expecting any kudos or accolades for what they were doing. I am so thankful for the Ronald McDonald House. It is truly The House That Love Built®.