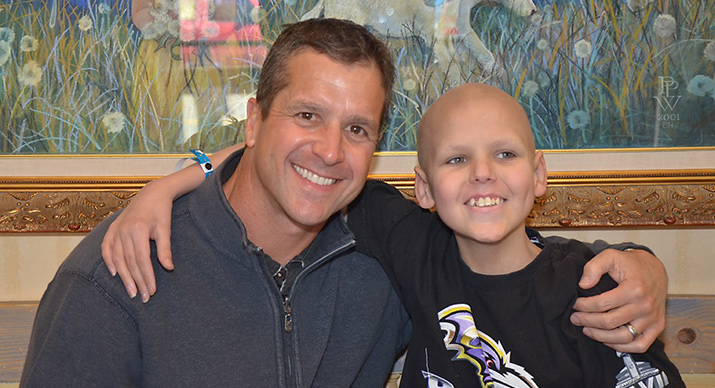 You’ve heard of one-name sports stars and celebrities, and that’s all well and good.  But, around the Ronald McDonald House, the staff and fellow guests have their own one-name celebrity whose signature move is called “doing The Michael.”  It’s a extra-big smile that’s genuine, uplifting and 100% contagious.  When he shines that smile on you, your day is suddenly brighter.

Michael Keller, hailing from Hagerstown, reflects the best part of the special magic that is the Ronald McDonald House.  Here, each individual guest contributes to the spirit of comfort and friendship within the House.  Michael epitomizes that special contribution. In a place known for turning fears into courage and frowns into smiles, Michael is famed for transforming his own difficult medical journey and others’ tough experiences into something beautiful.  And he’s only 13.

At age four, Michael had a bunch of stubborn ear infections, and then his skin began to turn yellow.  The cause turned out to be leukemia.  At that tender age, the small child underwent chemotherapy and stayed in remission for the next 9 years.  Michael lived a classic happy childhood, as a rambunctious kid with boundless energy, enjoying his family, school, pets and especially fishing and swimming.

But then, dishearteningly, a painful ear signaled trouble.  His skin turned yellow once again, confirming his parents’ fears that his leukemia had returned.  And so Michael and his mom Paula left the family home in February 2013 bound for Johns Hopkins Pediatric Oncology, parting from his stalwart dad Mike and 7 sisters.  One of those sisters, Michelle, age 17, turned out to be the right donor for Michael’s bone marrow transplant.

The transplant was performed and for an entire month, Michael was subjected to inpatient scrutiny and a pharmaceutical regimen.  Paula, alone by his side, worried and watchful, gently prodded and jollied, her young teen.  The hospital stint was necessary, but it was lonely, for the naturally exuberant Michael.

Even after that month, there would be two more months of Hopkins-supervised recuperation – involving daily, then twice weekly, then weekly check-ins at the hospital.  Not a terrific prospect, but at least he would soon leave the hospital.  Michael, now extremely thin and hairless, felt relief at the prospect of being released from 24/7 reminders of his illness.

Discharged from Hopkins, Paula and Michael were greeted by Mr. Gary, the Ronald McDonald House Shuttle Driver Ambassador, and felt immediately “cared for.”  He lifted all their suitcases and medical accoutrements into the shuttle bus.  Paula was struck by Mr. Gary’s demeanor, “sweet, really sweet,” and felt an immediate sense that they were no longer alone.  Mom and son were transported to 635 West Lexington Street, welcomed “Home” and escorted up to their comfortable bright bedroom, and shown around their temporary new home.  For the first time in weeks, Michael flashed his ginormous smile, now legendary at Ronald McDonald House, and named “The Michael.”

First came relief, then comfort, and then fun.  As they ventured around the House they discovered sun-filled spaces, happily decorated in red and yellow, and a hub of games, activities and music.  There were kids and families who actually seemed content to be there, in spite of the reasons why. Paula and Michael particularly welcomed the home-cooked meals provided by volunteers, from spaghetti to outdoor cookouts.  Most meals were “almost as good as Mom’s” says Michael.

By week two, friendships formed.  The House staff marveled at how Michael listened and uplifted his new friends when they experienced worries or a tough day at the hospital. It was Michael who would give them his radiant smile and use the power of play – air hockey, video games and pool – to brighten their days.  Paula too made new lifelong friends, “I got close to the people who got close to Michael.”  Paula looked forward to evening chats with the other parents.

Michael and his smile became additional benefits of the Ronald McDonald House!  Michael added extra vitality to the House’s volunteer-run activity nights.  From science experiments to bonding with a huge slobbering dog named Spanky, Michael’s enthusiasm ratcheted up the fun for other kids and the staff, too.  One evening, the Finksburg Baseball team–including the son of sports broadcaster Steve Davis—hosted activity hour.  Hearing about Michael, Steve Davis described the special 13-year old to Ravens Head Coach John Harbaugh.  Coach Harbaugh knew he just had to meet this kid.

So, to the thrill of the kids, parents and staffers John Harbaugh came for a visit! Imagine how big “The Michael” was that day.  In fact, doing “The Michael” was rampant on faces that day as the kind-hearted Harbaugh made a point of talking to each and every family at Ronald McDonald House that day.

No wonder Michael and Paula, while thrilled to get the go-ahead to return home, “were sad to leave everybody.”  They will need to return to Baltimore for check-ups and, even if not staying over, they promise to visit the place he’s impacted forever.  “There’s nothing I would change about Ronald McDonald House” says Michael.  And there’s nothing anyone would change about the boy who made a difference at Ronald McDonald House, uplifting hearts with that extraordinary smile.

Sadly, Michael lost his gallant battle in March of 2015, but his heart prints are in our House forever.