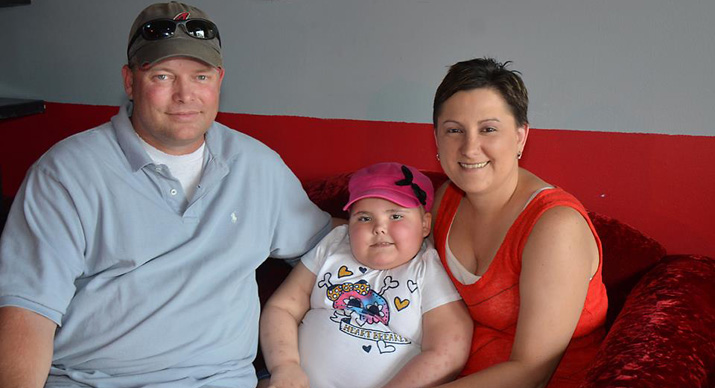 I’ve always known my daughter, Reagann, was special since the day she was born.

I had no idea how special she really was until she was 3 years old.

My daughter, Reagann Jolee, has an extremely rare disease called Rapid-onset Obesity with Hypothalamic dysfunction, Hypoventilation and Autonomic Dysregulation (ROHHAD syndrome) is a very rare disease affecting approximately only 75 cases worldwide. Patients with ROHHAD, as well as patients with Congenital Central Hypoventilation Syndrome (CCHS)[1] have damaged the mechanism governing proper breathing. ROHHAD syndrome is a disease that is potentially lethal and incurable.

There is no treatment, beyond experimental, or cure for ROHHAD and the source of the disease has not been identified. Symptoms of ROHHAD vary for each child and are usually misdiagnosed. They generally begin with rapid onset obesity in the first 2-4 years of life, followed by impairment of the nervous system and inevitably reduced lung function leaving most ROHHAD patients unable to breathe without the use of a ventilator

When Reagann was around 2 years old she started slowly gaining weight. At first I didn’t think too much of it, she had been on steroids and we assumed in the beginning that they were the cause. After a few months it was clear to me that something was wrong, that it was not normal for a 2 year old to gain 3-4 pounds per month.

The first year Reagann gained around 30 pounds and today, nearly three years later, she has gained a total of around 70 pounds. We were told repeatedly that we were over feeding our child.

We keep Reagann on a very strict diet, we limit her to around 1000 calories per day and 100 carbohydrates per day but nothing seems to help. We’ve travelled across the country trying to get help and to figure out what was wrong with our child. We took her to the Cardinal Glennon Children’s Hospital in July of 2011; Mayo Clinic in Rochester, MN in August of 2011; St. Louis Children’s Hospital in September of 2011; Children’s Memorial Hospital in Chicago, IL in April of 2012 and Johns Hopkins Hospital in January of 2013.

Reagann was officially diagnosed with ROHHAD at Johns Hopkins Hospital in January of 2013. Our primary physicians are located at St. Louis Children’s Hospital where Reagann is followed by Pulmonology, Endocrinology, Oncology and Ophthalmology.

Reagann has many symptoms of ROHHAD but there are no official tests to diagnose ROHHAD. ROHHAD is basically a constellation of many unexplained systems. Reagann’s symptoms include: Rapid onset obesity; Diabetes Insipidus (water imbalance); Strabismus (eye abnormalities); Neuroblastoma Cancer (ganglioneuroblastoma tumor); skin issues; food seeking; personality & behavior issues; reduced lung function; tachycardia, to name a few. Reagann does not, at this time, have hypoventilation, meaning she is still able to breathe on her own.

Most doctors and health care professionals have no knowledge of ROHHAD. It is extremely hard to get a diagnosis and once you do receive a diagnosis there are no official treatments and no cure. The source of the disease has not been identified.

The doctors at Johns Hopkins Hospital feel that ROHHAD is an auto immune process that is “caused” by the tumor. The tumor attacks your Hypothalamus, which is a part of the brain that controls nearly everything in your body: your central nervous system, breathing, hormones, memory, speech, etc.

We decided to be pro-active and go the experimental route to try to stop progression of ROHHAD. In February of 2013 we started Reagann on an experimental treatment of low dose chemotherapy to suppress her damaged immune system. We saw many positive results; with the thought being that if you completely destroy her immune system, those changes would be permanent.

In June of 2013 we came back to Baltimore for our third time to proceed with high dose chemotherapy called Cyclophosamide. This treatment, nicknamed “Hi-Cy” has been given to two other children with ROHHAD in the world. Reagann is the third. This treatment is one of the highest doses of chemotherapy given, without a bone marrow transplant. She was given four doses of Cyclophosamide within four days. Her immune system was destroyed, and we are now rebooting her immune system. We have seen many positive results, the most notable result being that her carbon dioxide is now in normal range, where it had been elevated, which is a sign of hypoventilation.

A lot of people and things factored in to our decision to move to Baltimore for the summer and try to save our daughter’s life. The Ronald McDonald House is one of those factors. Because of Reagann’s health issues and her being immune suppressed, my husband was forced to stay home with Reagann full time beginning in January of 2013. Because of the decrease in our income, we were not able to afford to rent an apartment or house during our time in Baltimore. The Ronald McDonald House has been a godsend, but not just for financial reasons. The people who work here are probably some of the most phenomenal people I’ve ever met. From the first day we arrived, everyone knew our names, even if we didn’t know theirs. They have become like family to us, and several of them I personally feel like I could call a good friend.

The environment at Ronald McDonald House is perfect for sick children and families of sick children. There is no judgment here, children who normally get stared at or made fun of, have no issues here. Everyone is equal. We have been blessed to meet the most amazing families and make wonderful friends.

I can never repay everyone at the Ronald McDonald House for the impact you have made on our lives and for being there for us at our lowest most vulnerable point. To each and every staff member, volunteer, and contributor to the Ronald McDonald House of Baltimore, we give our deepest and sincere thanks and gratitude. You have made our time here so very special, and helped to make us forget that we are one thousand miles away from our home, our family and friends. We can never repay you but will pay it forward!