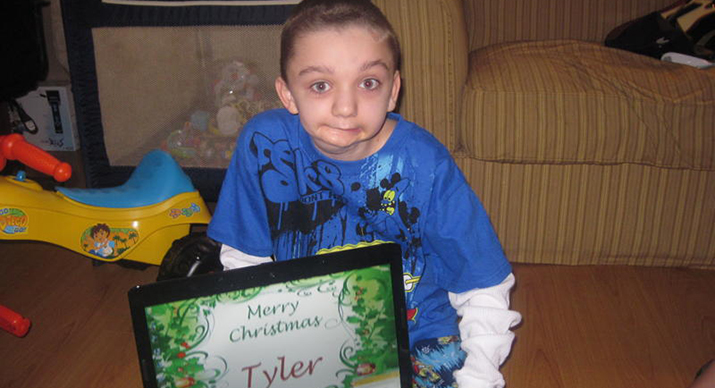 The Face of Resilience.

The Ronald McDonald House is renowned as a place where resilience is refueled, where everyone and everything is focused on bolstering hope, eliciting smiles and refreshing weary spirits.  For the staffers at Ronald McDonald, resilience has many faces.   This is the story of one of those, the remarkable Tyler Tucker.

Tyler is a 12-year old boy who’s come to Baltimore for his 57th surgery.  This is a story of resilience detailed by Tyler’s grandmother Darlene and mom Ashley.  They share a litany of unhappy discoveries, endless surgeries, excruciating pre-op procedures, painful daily therapies and devastating additional physical complications caused by the surgical “solutions.” It is painful hearing the story; Tyler has been living it since the age of two.

That’s when the Tuckers learned that a cyst in Tyler’s mouth was actually Rhabdomyosarcoma of the mandible, so rare that there are few –if any– treatment precedents. Rhabdo is Cancer of the face. Few other children with this disease have survived.

Tyler’s first jaw surgery at age two, to extract his cancer, caused an inability to breathe.  A tracheotomy was performed.  Then his tiny jaw fell, requiring physicians to wire his mouth shut.  Feeding tubes kept falling out, replaced six times.  To rebuild the left side of his jaw where the cancer was removed, surgeons used material from his femur bones. Shortly thereafter was a new discovery, the cancer had infiltrated his miniscule lungs, necessitating removing the upper right portion of one lung and months-long intensive radiation and chemotherapy to save the remaining lung capacity.

The jaw replacement didn’t last, and due to the fact that his young face was still growing, subsequent jaw transplants – even if successful – would not be permanent for any length of time. In 2009, physicians removed fibula from each calf for building another new jaw.  He walked into the hospital for surgery but was unable to walk out.  Tyler’s formerly functional legs intermittently collapsed on his ankles.  The screws used to re-attach the two fibula flaps kept trying to come out, shifting sideways; another complication to test the Tuckers’ resilience.

The Tuckers would go on. “As I have said so many times, I will do anything to save Tyler,” says his mom.  An oath has been pledged by the people encircling Tyler – family, physicians, and legions of followers from tylertucker.com – they are of one mind.  We will never give up on Tyler.

So, the brave trio, Tucker, Darlene and Ashley traveled 600 miles from Greenville, SC, to Baltimore for a surgery estimated to take 15 to 18 hours.

Their travail was well-rewarded.  Dr. Rodriguez’s surgery to shore up Tyler’s left jaw with cement has been successful! That side is now restored, evening up his face, and the jaw will hopefully stay in place for three months. Then another surgery will be required.  No one expects a fairy tale ending; but for now, this is refreshingly good news.

Back at the Ronald McDonald House for post-surgery recovery and strengthening, Tyler amazes everyone who meets him. How has he maintained the courage to go on? How do his physicians stay committed despite repeated discouragements?  How do Tyler’s parents and grandparents stay hopeful?

Those questions go poof upon meeting Tyler.  Correction: POOF!!! Tyler greets visitors with intelligent eyes conveying –in heaps — an impish charm and he cocks one eyebrow.  They say he is physically unable to smile but you’d never know it.  His eyes are smiling, engaging, irresistible. No wonder the quest for health will never, ever end for his family and his doctors.  To meet Tyler is to adore him.

Tyler shows his stitches under his jaw and counts the scars on all parts of his body.  He shares tales of home — his multiple cats, dogs, rabbits and chickens, two siblings and his beloved teacher Ms. Bright.  There’s healthy laughter.

The Ronald McDonald House effect has kicked in.  Bad days do happen, sad moments are inevitable.  Yet, the House offers uncommon understanding, relieves sadness and provides joy on multiple levels.  While Tyler rested, Ashley and Darlene had time to settle down emotionally, relaxing at the House, taking time outside, reading in comfy chairs, talking with friends.  The collective effect– his mom’s refreshed outlook, little treats from the kitchen, the allure of fun outside his room — drew out Tyler’s natural resilience.

Sure enough, soon after, Tyler emerged from his room, ready to interact with the other kids at Ronald McDonald House, all of whom are in similar boats, understand one another and bolster one another.

Tyler Tucker rises again. Think you need to put some kind of closer in here that ties it all back together… “Rises again, ready to face the next challenge with resilience, hope, optimism and the love of his South Carolina Family and his RMH Family.”